The Two Faces of Newt Gingrich

“I have an enormous political ambition,” Gingrich told the Washington Post. “I want to shift the entire planet and I’m doing it.”

Well, you can now stick a fork in Herman “grabass” Cain because he is done. Next in line is the resurrected Newt Gingrich. Happily married (finally) and newly converted to Catholicism which I understand absolves him of all his past sins that he never admitted, he appears to be the new darling of the NeoCon dominated Republican party. Drudge devotes a headline a day to Newt now. Who said you can’t put lipstick on a pig?

I call Gingrich a CFR conservative. He is the ultimate in contradictions. While he is still a family values hypocrite – what is really troubling is his allegiance to the CFR ideas of a one world government. These are a complete contradiction of conservative ideas. They are NeoConservative. This was clear when he embraced the CFR inspired NAFTA plan and in spite of the lack of support for it from both parties, pushed it through Congress for Bill Clinton. We now see Clinton paying him back with his recent endorsement.

So Newt, where are the jobs and prosperity then? NAFTA was suppose to usher in a new age of prosperity for the US and Mexico. In reality it was just a CFR pan to transfer wealth from America to Mexico. I think most of it went to Slim Carlos. I can still hear what Ross Perot called “the sucking sound” of jobs and factories heading south of the border.

Newt shows himself to be a two faced “world without borders” advocate as well. From Creating A New Civilization we have the following:

“Poets and intellectuals of Third Wave states sing the virtues of a “borderless” world and “planetary consciousness.”

Nationalism is the new dirty word for the Zionist elite. While Newt vies for the vote of the anti-illegal immigration crowd he also calls for a borderless world. Do you see the two faces of Newt yet? While he calls for restrictions on illegal immigration and securing the border now, he was an advocate for NAFTA, the one piece of legislation that disrupted the fragile Mexican agrarian based economy and drove millions of illegals north of the border looking for work and jobs. NAFTA flooded Mexico with subsidized corn from US farmers. The result was it put all the small Mexican corn farmers out of business – as they had already done to US small farms. So he creates the problem or at the minimum throws fuel on the fire and then pretends that now he’s the solution to the problem that he created. The two faces of Newt.

This article shows just how immersed he is in the concepts of a one world government, the New World Order and Zionist ideas on how to control the world. Alvin and Heidi Toffler (Zionist Jews) enlisted the endorsement of Gingrich and the three set forth this plan in the volume, Creating A New Civilization.

Gingrich wrote the foreword for this book. In the volume is the troubling statement about dismantling the Constitution and creating a new “third wave civilization” – semantics aside – a Zionist run New World Order. Here we see the real Newt Gingrich. He is a chameleon agent of the CFR masquerading as a real Republican ‘conservative’. Gone are the family values of the old con man. Welcome to his “third wave civilization” and what he now calls “new family styles.” Whatever the f**k that is.

“The Constitution of the United States needs to be reconsidered and altered…to create a whole new structure of government… Building a Third Wave civilization on the wreckage of Second Wave institutions involves the design of new, more appropriate political structures… The system that served us so well must, in its turn, die and be replaced.” –Creating A New Civilization

Did I mention that Ron Paul has none of these flaws? Incidentally today Ron Paul released a great video showing some of Newts two faces on other issues not covered here. I can truthfully say that before I voted against Newt I voted for him. While I have learned how not to be fooled by Newt again many Republicans are showing a much slower learning curve.

His Holiness of Hypocrites? 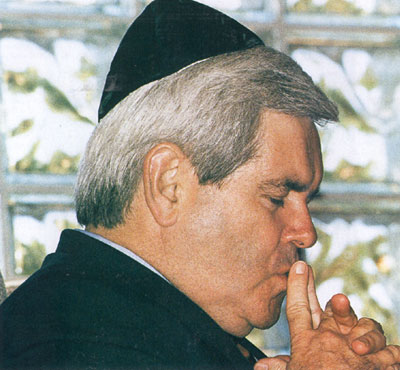 A big shout out to Texe Marrs for revealing this new face of Newt. You need to read his article to see an in depth analysis the serpentine mind in Newt.

This entry was posted on Wednesday, November 30th, 2011 at 7:43 pm and is filed under Obama. You can follow any responses to this entry through the RSS 2.0 feed. You can leave a response, or trackback from your own site.

One Response to The Two Faces of Newt Gingrich