“From the halls of Montezuma to shores of Tripoli” – Marine Hymn 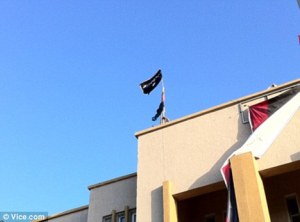 Obama, Dear Leader, Nobel Peace Prize winner and our very own Rat in Chief has raised the flag of his beloved Al Qaeda “rats” over Benghazi. He proudly proclaimed “this is a recipe for success.” It is a fitting tribute to man with no courage, no honor, no integrity and no real leadership abilities. His only real gift is in reading from a teleprompter and practicing his simplistic Jedi mind tricks on America and the world. According to recent polls and an astounding number of Americans (43%) still fall for this nonsense.

While the brainwashed Americans mouth the words of hate put in their simpleton minds by the media programmers, they fail to realize just how far America has fallen. It is true that the women dragged Obama to this war, and in his emasculated state he is just as guilty as they are. He wasted no time seizing the day, proclaiming it a great victory for freedom and for Libya. But at what price? The reality is, this is the lowest moral depravity that America has sunk to in its 200 year history.

It did not achieve this goal by pure numbers although the Libyan casualties of this undeclared war are great. Under a UN no-fly resolution, innocent men, women and children are killed by a merciless NATO bombing campaign and the NATO Al Qaeda ground troops performed their bloody work as well. Genghis Khan would be proud of the combined armed forces of NATO and Al Qaeda – it was truly a scorched earth policy. They might as well have launched diseased bodies into the city from catapults. A bloody trail of rape, murder, racial killings of blacks and headless sacrifices lead across the desert. Even now they uncover mass graves in Sirte left by our new allies, the Al Qaeda rats. None of this would be possible without the US leading the way. And who will be tried for these crimes? Who will be brought to justice? Al Qaeda? Obama? Clinton? The little french shit Sarkozy?

The final insult to my intelligence and it should be to every American is arming, training, and supporting with NATO air power, the Al Qeada rats. Even they admit that without NATO there was no victory for them. How does anyone justify this? Are Americans completely ignorant? Don’t they know these very same rats led LIFG fighters in Iraq that killed Americans soldiers with relish? And now Obama makes them our allies? They raised the Al Qaeda flag over the Benghazi courthouse and declared that Sharia law will rule in the new Libya. Gaddafi would have destroyed these rats in Bengazi had not NATO intervened. Now we have put them in the seat of power and called it democracy? Are you kidding me? How did America get so twisted?

When I started this blog I knew it was going to be bad, but I did not realize the level of depravity America could sink. Bush was bad but Obama is far worse. Even I am shocked at the mindless brutality America has embraced and called liberation and democracy. This undeclared war is the beginning of an era of a Dictator that has installed himself in power in America and knows no rule of law. He violates the US constitution. He violates international law and he violates common sense and decency. He treats Congress like a convenient rubber stamp for his bloody deeds and they roll over like a $50 whore. They called Gaddafi a ruthless dictator but I have yet to see any evidence produced of his deeds. I have seen the evidence of Obama’s bloody dictatorship. I have seen his bloody handiwork in Libya, this Nobel Peace prize winner. When he is done blood will run in streets. “The days will come when they will call a murderer a man of peace” and “Satan himself is transformed into an angel of light.”

A Satanic orgy of war and murder and killing is on the horizon. If you celebrated Gaddafi’s death you ought to be ashamed of yourself for you are a participant in the bloody deed and just as guilty. His blood is on America’s hands and we as a nation will pay a terrible price for this crime. This is how America creates terrorists. This is how America destroys the free world. This is why the good people in Libya hate America now. We destroyed their country and freedom they had. Libya is in shambles because of NATO bombs and Al Qaeda rats. America has degenerated into a hypocritical nation of murderers who are morally and financially bankrupt. That is what America has become and we want to impose this system of slavery and debt on Libya and tell them they are free? Apparently they are not free to make their own choice because they overwhelmingly supported Gaddafi, no matter what you may think of him. What a crime against humanity. The real free people of world despise America and what it has become – and with good reason.

Thank you for the comment. The western world has fallen for the demonize Qaddafi propaganda routine. That people feel this way is understandable as I myself did until I began to investigate the facts surrounding the two incidents used to attack him. Perhaps 95 percent of Americans feel this way and this is due solely to western propaganda. A closer examination of the facts shows him to be a person of superior quality than almost all western leaders. He was not a terrorist, he did not bomb the disco in Berlin which was a MOSSAD operation to blame him and used as a justification by Reagan for attacking Libya. Victor Ostrovsky revealed this secret operation in his book about the MOSSAD. Qaddafi did not order the bombing of Pan Am flight 103, another CIA operation where Scottish police have admitted they were paid by the CIA to lie about finding the evidence used to convict him. That appears to been an Iranian operation which used a CIA drug smuggling ring to get even with the US Navy over the shooting down of a civilian airliner over the gulf which killed about 300 Iranians in 1988. USS Vincennes downed a civilian airliner in violation of all international laws. So who is the real terrorist?

He took care of his country and his people to far greater degree than any western leader. His green revolution shows many advanced ideas that are an improvement over our American faux democracy. Certainly he is leagues ahead of Obama, Bush, Clinton and even Reagan who perpetuated and really began the attacks on Qaddafi based on pure CIA MOSSAD lies. Reagan had no justification for attacking him and perhaps he believed the CIA/MOSSAD lies as well. Ollie North the perpetual NeoCon liar, headed up the Qaddafi sheep dipping dept at the White House during the Reagan years. So I believe that was a very good person who ended up with a knife stuck up his ass by the Zionist run west while Hilary laughed about it. That says more about the moral corruption of the west than it does about Qaddafi. The west used Muslim extremists to destroy a peaceful successful prosperous country in the name of democracy. They used the same extremists that were killing US soldiers in Iraq. McCain called these guys freedom fighters. Now they killed the US ambassador. Mission accomplished? The entire western world was wrong in attacking him and though you may call it sanctification I call it trying to set the record straight.

This entry was posted on Monday, October 31st, 2011 at 9:45 pm and is filed under Libya War Crimes, Obama lies, Obama New World Order. You can follow any responses to this entry through the RSS 2.0 feed. You can leave a response, or trackback from your own site.