“there are no rules for revolution but there are rules for radicals who want to change their world.” –Rules for Radicals, Saul Alinsky

I noticed a spate of attempts by Obama and his Brownshirt Democrats to redefine basic concepts and ideas. He is twisting definitions to fit his radical political agenda. He is attempting to redefine the wheel. The world is now flat according to Obama. Some have seen these statements as gaffes as when he lauded UPS and Fedex over the Post Office while trying to sell his government plan.

I think they are intentional attempts to twist the meaning of words to deceive people. I have not studied “Rules for Radicals” but I’m willing to bet there is a section in there on methods of persuasion by twisting definitions. I did a quick Google search and was able to find this revealing quote on Pg 60.

“All definitions of words, like everything else, are relative. Definition is to a major degree dependent upon your partisan position.” –Rules for Radicals, Saul Alinsky

This is what Obama said recently:

“Any plan I sign must include an insurance exchange, a one-stop shopping marketplace where you can compare the benefits, cost and track records of a variety of plans including a public option to increase competition and keep insurance companies honest and choose what’s best for your family,” 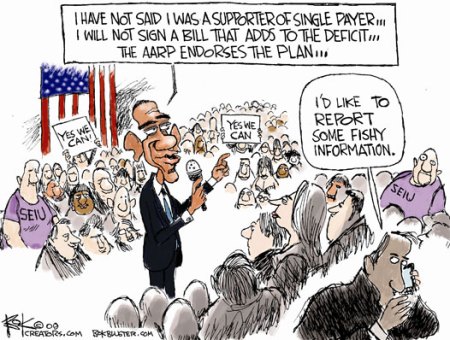 At the core of this argument is the idea that a “public option” is going to increase competition in the free market. The government is going to compete in the free market and lower costs for consumers. Excuse me but what does he base that theory on? There no evidence that any government endeavor increases competition. In fact it does just the opposite. The only evidence that exists shows that the government is inept and wastes money and in the case of Freddie, Fannie and the Post Office – loses lots of money. The only competition they can provide is if they are subsidized and even that is questionable. A poorly run private enterprise is always better than the best run government program.

The idea that the government can provide competition in the free market that will result in cost savings for Americans in and of itself is laughable.  In Obamalogic, government involvement equates with free market competition. Is Obama that stupid or is this an intentional attempt to redefine reality for his own political purposes? I don’t think he is that stupid. I do think he is a socialist.

…the President has also said I don’t know how many times if the goals are choice and competition, right, the reason you have a public option is because you have an insurance market that doesn’t have choice or competition.

The most glaring statement on this was by White House spokesman Robert Gibbs. In addressing all the hysteria about dropping the public option, this is what he said:

…The President strongly believes that we have to have — and I mentioned — I walked through the notion of why choice and competition are so fundamentally important to this debate — that in a monopoly, without consumer choice, without competition among health insurance providers, you’re certainly not likely to see cut in cost, you’re certainly not likely to see a competition on quality. And those are the goals that the President has.

On the surface this all seems well and good, a noble intention by Obama. Free market principles and ideas applied to a government run health care system. If he really wanted more competition they could remove the restrictions that prevent insurance companies from competing over State lines.

Here is a list of major health insurance companies operating in America today published on Wikipedia.

By any definition this is not a monopoly. Gibbs claims that because one company dominates a market in a certain state, that constitutes a monopoly. If they removed the Federal restrictions that prevent insurance companies from competing across state lines that would increase competition and reduce costs. This is a way the Federal government could use it’s power to foster a more competitive free market. There are proposals like this in Congress but Obama, in spite of his rhetoric of being willing to look at all proposals, has refused to embrace this idea. That indicates to me that this is not what he is really interested in accomplishing.

Gibbs also had this to say:

…the President — his position, the administration’s position is unchanged; that we have a goal of fostering choice and competition in a private health insurance market. The President prefers the public option as a way of doing that.

The real problem is that Obama’s way of bringing competition and choice into the marketplace would ultimately remove any choice for Americans. Private insurers would be forced to compete in an unfair playing field. Eventually they would be forced out of business. The government does not have to make money to stay in business. Clearly all it does is use and lose money. What is the  government’s expertise when it comes to efficiency? When did it ever make a profit?

In an Op-Ed written by Caroline Baum and titled “Obama Goes Postal, Lands in Dead-Letter Office” she asks some very obvious questions about Obama’s questionable logic.

Everyone makes a mistake or flubs a line when asked questions on the spot, including the president of the United States. We can overlook run-on sentences, subject and verb tense disagreement, even a memory lapse when it comes to facts and figures.

The public is left with one of two unsettling conclusions: Either the president doesn’t understand the health-insurance reform plans working their way through Congress, or he understands both the plans and the implications and is being untruthful about the impact.

Neither option is good; ignorance is clearly preferable to the alternative.

Deficit-neutral is a new word that the administration has been throwing around recently to try and overcome one of the main complaints about their new health care system. “It’s too expensive and we can’t afford it.” They hope to fool people with this silly rhetoric. They hope to imply they are fiscally responsible. So far it doesn’t look like it’s working…

U.S. healthcare reform will be “deficit-neutral” and the chances it can be delivered by August are “high,” the White House budget director (Peter Orszag) says.

Obamalogic like Obamanomics does not work. It defies reason and logic and relies on superficial emotional deceptive appeal. Like the ancient Sirens of old they tempt us into the rocks of socialism. It is irrational and ultimately destructive for America. It is in fact UnAmerican.

This entry was posted on Wednesday, August 19th, 2009 at 1:56 pm and is filed under Obama. You can follow any responses to this entry through the RSS 2.0 feed. You can leave a response, or trackback from your own site.