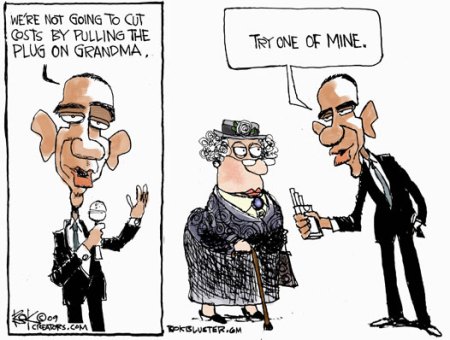 WASHINGTON (AP) — About 60,000 senior citizens have quit AARP since July 1 due to the group’s support for a health care overhaul, a spokesman for the organization said Monday.
The membership loss suggests dissatisfaction on the part of AARP members at a time when many senior citizens are concerned about proposed cuts to Medicare providers to help pay for making health care available for all. But spokesman Drew Nannis said it wasn’t unusual for the powerful, 40 million-strong senior citizens’ lobby to shed members in droves when it’s advocating on a controversial issue.

According to Dick Morris this is terrifying prospect for the Democrats who have kept the Senior vote over the years with Medi-scare and Social in-security scare tactics. The prospect of losing the care they have become used to is more than a little unsettling for the elderly. Morris says we only need few more seniors to stop this.

I can’t help but see the irony of senior citizens who have become use to a certain level of entitlements stopping a government attempting to create even more dependents. Dick Morris was interviewed by Greta Van Susteren recently and had this to say as well.

But the real thing that’s bothering Obama and the Democrats is not the poll numbers. They can tolerate bad poll numbers. It is the block voting of senior citizens against this package. The Democratic Party is composed of building blocks, interest groups. Republicans aren’t. They’re just a group of people who think the same on issues. But Democrats are blacks, plus Hispanics, plus women, plus young people, plus labor unions, plus the elderly. And when one of those blocks turns against what the Democrats are doing, the party gets scared to death.

And right now, senior citizens are by more than 20 points opposed to this program. And that is why the program may be defeated because they know that if they lose the elderly, they lose them forever. They won them over Social Security, now they’ll lose him over the repeal of Medicare, and they’re not prepared to do that.

This entry was posted on Tuesday, August 18th, 2009 at 1:36 pm and is filed under Obamacare. You can follow any responses to this entry through the RSS 2.0 feed. You can leave a response, or trackback from your own site.

One Response to AARP loses members over health care stance