Obama declares war on the white police. Guess he just can’t shake his radical roots. Obviously the police didn’t like it. Sergeant James Crowley doesn’t seem to have any problem sticking up for himself and doesn’t appear ready to back down. Well there goes their share of the stimulus (political bribe) package

Obama is a man that appears to be at war with himself. The black half is discriminating against his own white half. Pretty funny really. What business is it of a president to get involved in a small local affair like this? Just because CNN has become the 24/7 race news show. It shows just how small minded and petty he really is. And he isn’t even black – he’s just a wannabe black. It was a stupid comment and he really put his foot in it. It’s amazing the amount of arrogance this guy possess. His news propaganda event was suppose to be about Obama care. But he has to go turn it into a race event showing us all what a bigot he is.

What a jackass Obama is. I thought he was suppose to bring us all together. So far all he has been is a polemic charlatan. A guy who knows nothing but pretends he knows everything. Why is a president commenting on a small local event like this anyway? Does he think playing the race card is going to make us feel sorry for him so we vote for his Obama care scam? Are we suppose to all feel guilty. Playing off that white guilt like he did to get elected. Well it has back fired as they scramble to try and reinterpret his obvious remarks for us. Even Bill Cosby is shocked he would get involved in this. 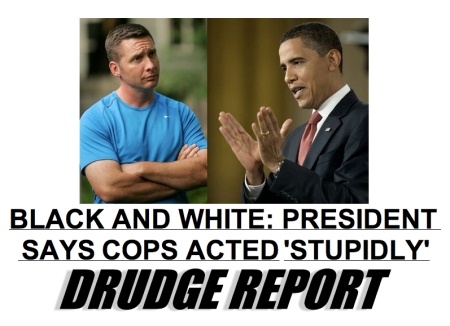 This entry was posted on Thursday, July 23rd, 2009 at 4:06 pm and is filed under Obama. You can follow any responses to this entry through the RSS 2.0 feed. You can leave a response, or trackback from your own site.